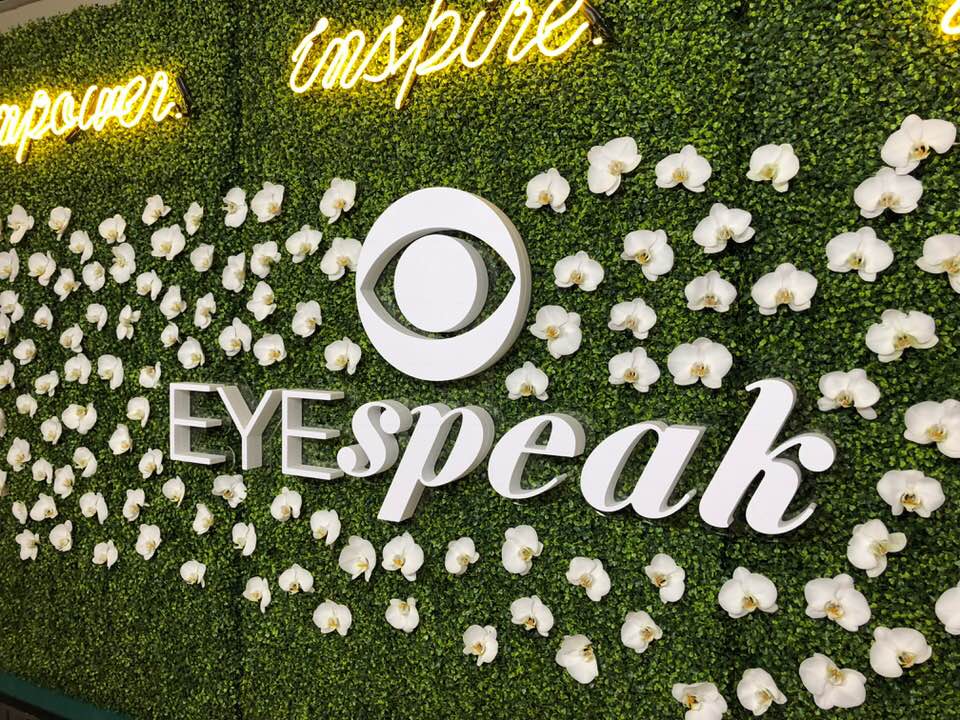 Groundbreaking work can be exhausting. So, you’ve got to know where your fueling stations are. Last week, #50WomenCan found another one at the launch of CBS EYE Speak. Our cohort has partnered with CBS Entertainment Diversity to keep driving media and entertainment toward gender parity.

CBS’s EYE Speak initiative is designed to promote female empowerment and help forge a path of growth and opportunity for women in the CBS as well as the entertainment industry sum total. The program kicked off with an event on March 14 hosted by CBS at the Pacific Design Center. The evening featured a panel of strong female voices both in front of and behind the camera. They include: Maria Bello (NCIS), Sonequa Martin-Green (Star Trek: Discovery), Sara Ramirez (Madam Secretary), Gina Rodriguez (Jane The Virgin), Lori McCreary (Madam Secretary), Aline Brosh McKenna (Crazy Ex-Girlfriend) and Jennie Snyder Urman (Jane The Virgin).

Tonight we continue the conversation at our first #CBSEyeSpeak Summit. Maria Bello, Sonequa Martin-Green, Gina Rodriguez, Sara Ramirez, Lori McCreary, Aline Brosh McKenna & Jennie Urman will be joining us for a panel discussion, moderated by Nina Tassler. Be sure to follow along for live updates!

Moderated by former Chairman of CBS Entertainment, Nina Tassler, the group spoke candidly about power, money, ratifying the ERA, narrative arts, representation, inclusion and the future of the industry. Within the discussion, salient points arose that anyone working toward a better future for entertainment should keep in mind. Here are 5 powerful media leadership thoughts from CBS EYE Speak initiative.

“Jobs. Opportinities. Jobs. Jobs,” Aline Brosh McKenna emphasized to the guests. As the creator of #femalefilmmakerfriday, a hashtag that raises awareness for female storytellers, Aline sees that parity requires actual cash. Expanding on the idea of inclusion riders Frances McDormand mentioned at the Oscars, Aline emphasizes, “Hire women, people of color, people of different sexual orientation, trans people… Make an effort to hire someone who doesn’t look maybe like the image you have of that person in your head.”

Nina Tassler added to the power of decision makers communicating to each other about great people. “If you’ve met somebody who is of value to someone else, exchange resumes.”

Shifts require more than talk. Change can’t hold without money behind the change helping it take root. Our world thrives on economy and fiscal energy. An inclusive future needs jobs, financial backing and the opportunity of financial risk.

If You Need Mentorship, Ask For It.

Our instincts will only take us so far. At some point, trailblazers need mentors. Maria Bello expressed how she’s gone her entire career without female mentorship. Then, one day, it occurred to her that maybe she hadn’t asked for it.

“I reached out to one of the most successful women in the industry and told her I need mentorship. And she said ‘Yes.’” Maria shared with the group. Maria’s journey easily  points out that we can’t expect people to know we seek guidance and help. Have the courage to actively ask for the help you need.

Aline sees this as an illusion that causes unnecessary divisiveness. “That’s what I’m saying about please hire other women. There’s enough seats at the table. We don’t have to fight. There’s plenty of room.”

“And we can pull our own tables out,” Maria Bello added. If we approach change from a perspective of abundance, we strive to welcome positive change for all, not just for some. We can always build longer tables.

Narrative arts reflect our lives back to us. It tells our stories, our dreams, our darkness and our light. It can shape how we see ourselves in the world, what we imagine as possible and expand our understanding of each other in a way that fosters tolerance. Sonequa Martin-Green mentioned how her young son actively needs to see himself reflected in the art and media he observes. “That’s me. That’s me, mommy.” Sonequa stated he exclaims without an provocation. “I realize how much he needs to see himself.”

Gina added to this idea, “I believe art can create tolerance.” She spoke on how empowering it was to see America Ferrera in ABC’s Ugly Betty and her fellow panelist, Sara Ramirez, playing a doctor on Grey’s Anatomy. “I thought, we got one. We can be doctors, too.” “To get told you can only do so much in the media because this is how we view you started to affect how I viewed myself.” “For me to look up and say, ‘I’m limited because of my skin color.’ …I’m only allowed to be the maid, to be the gangbanger’s girlfriend.”

Sonequa spoke on the value of acculturation, “We have to understand that our culture’s [are] valuable… My culture meshes with yours and yours meshes with mine but we don’t take from each other.” Bottom line, representation matters. If you can see it, you can be it. The stories we choose to tell shape our view of the world and our beliefs. This is why the narrative arts can have healing power.

Groundbreaking work can be exhausting. So you’ve got to know where your fueling stations are. #50womenCan found another one tonight at @CBSEntDiversity + @cbseyespeak #EYEspeak event with #seeher. Representation matters. Narrative arts that embrace acculturation can help us heal, grow and become a stronger human society.

“You can’t sell an action movie with all black women,” Maria Bello recalled sentiments she had to ignore while seeking distribution for her movie The Woman King. The film stars Viola Davis and Lupita N’yongo and is centered on a true story from Benin during the height of its power on the African continent.

Maria spent three years trying to sell the film. For two years, her fellow producers – and even Viola – went from meeting to meeting being told that their film was too risky for the box office. The film is now being released by TriStar and Maria laughed as she remarked, “Now, they’re all in their offices crying their eyes out because Black Panther made a billion dollars.”

Persistence is key when you are prophesying a conscious shift. Shifts happen over time. It takes a short game and a long game: a combination of timing and endurance for different thoughts to push through our preconceived notions. Many of the panelists pointed out how the industry is reluctant to let women fail, although failure is a part of the process of success. For now, inclusive stories bear pressure to perform and over-perform financially. Trailblazers must be resilient in presenting the new idea over and over and over again until it takes root and finds its moment to shine.

The launch event for “EYE Speak” was held in concert with the Association of National Advertisers (ANA) and its #SeeHer campaign. #SeeHer was created with the mission to portray girls and women accurately in media. The goal is for women and girls, by 2020, to see themselves reflected as they truly are. The “EYE Speak” kickoff event is part of CBS’ ongoing partnership with the ANA to promote the initiative’s mission.

Anish Kapoor at Palace of Versailles
WORKING ON: Afternoon Tea with Amelia Boynton Robi...
How We Fund Gendered Values and The Great American...
Rihanna Makes History as the New Face of Dior
Germanwings Alps crash: Airline change their Twitt...
I Worked With a Cannabis Concierge and Learned Thi...
Russell Westbrook Tapped as Creative Director for ...
Carolina Herrera Sponsors Frida Kahlo Exhibit at N...